A capital fight has broken out this evening in Lantorn in Heimatar over a Faction Fortizar owned by Snuffed Out. The battle was fought over the Fortizar’s armor reinforcement timer, and a motley collection of primarily lowsec alliances (later joined...

The post Breaking News: 800b Cap fight in Lantorn over Faction Fortizar appeared first on INN.

On the 10th October YC120, at around 13:20 a collection of lowsec and Nullsec entities ambushed a mixed-tank The Initiative[INIT.] supercapital fleet  in the system of D-B7YK over an Azbel.

The Monthly Economic Report for June 2020 is now available!

You can download all of the raw data used in this report here. As always, each image can be enlarged by clicking on it.

For discussion, please head over to the official forum thread. 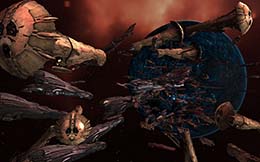