Week 29 of World War Bee was almost exactly even with week 28, with 30 fights and 39 hostile actions. Delve and its environs dominated the action of the week. INN’s cumulative theater tracker is still experiencing some database issues,...

On Saturday 2 January, both sides of the months-long nullsec war in New Eden gathered for another showdown in the system of M2-XFE. The fight was supposed to be a follow up to the biggest Titan clash in EVE’s history, which occurred just two days prior. This battle did not unfold the way anyone expected it to. A large proportion of the attacking side experienced in-game issues, which resulted 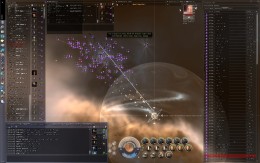